Femininity is Not a Weakness

‘I am this’ and ‘I believe this’ are not the same thing.

Egalitarianism. Feminisim. Humanism. Common-Sense. Whatever label you brand yourself with, it simply acts as a veil for your dogmas. You cannot claim to endorse gender equality yet be cynical about femininity. Such stated ideologies often act as tools to endorse ignorance as one screams ‘political correctness’ into the synthetic abyss of pc culture.

Femininity is cherished but, simultaneously, is easily dismissed. Like sex, being feminine sells but is rarely taken seriously farther than meets the eye. Exaggerated curves, pouty lips, Rapunzel-esque (and likely artificial) hair is coveted by the media in hopes of drawing in viewers like moths to a flame. Thus, young girls are socially conditioned to mould their appearance into some construction of the ‘feminine ideal’ which models, actresses, Kardashians and now ‘Instagram girls’ shove down our throats daily.

Fashion, Facetune and filters mentally stimulate us to associate the feminine with the beautiful. However, different contexts produce different reactions.

In 2017 the tagline ‘Woman’ is generally believed to be equally valuable to the historically superior status of man- at least on paper anyway. But is this only a formality?

According to The Huffington Post, two thirds of female politicians are littered with humiliatingly sexist remarks concerning their appearance whilst political figures such as Hilary Clinton are expected to dress smartly in order to hold a firm ground of respect against their masculine counterparts. In other words, to hide any trace of their physicality under the least ‘provocative’ (aka the driest and baggiest) pantsuits known to tailors. The goal is to appear as masculine as possible whilst also adhering to hetero-normativity.

Yet, when she appeared wearing scant makeup on national television she was ironically ridiculed for not keeping up appearances- in summary, women must keep up an ultra dry, sex-less image in order to hold their ground. Yet, of course, must still be presentable and not too masculine because our image represents us, right?

And, in the wrong context, femininity offends. Let us cast our minds back to the time when Angelina Jolie’s nipples gained more focus than her words as a UN ambassador- both at a conference and a more recent meeting with the Archbishop of Canterbury. The fine line between being seen as vulgar and as quintessentially possessing feminine traits isn’t just blurred; it’s already been erased.

It seems that femininity confines women to a less respectable position. As a run of the mill ‘girly’ girl I was once told “I didn’t know you were that smart” by the class ‘know it all’. And on a trip to Oxford University, being the first one from my group to arrive, I waited in the foyer alone only to have one of the staff, a middle aged man, look me up and down, from my waist long hair to my a line skirt, and ask me if I was sure I was in the right place- Topshop was just down the street, couldn’t I guess from his condescending smirk?

A physical display of traditionally “feminine” traits remains a coveted tool to gain male sexual attention and money, especially in pop culture. But it is looked down upon in serious contexts.

This extends to why people who are not interested in fashion and makeup dismiss it (due to its association with femininity) but are less likely to dismiss hobbies involving cars or sports. Likewise, ‘camp’ or more stereotypically feminine men are often portrayed comically on television and are not taken seriously whether gay or straight.

And while ‘Woman’ might be equal to ‘Man’, in stark contrast ‘Girl’ does not hold the same weight as ‘Boy’ because of the traditional connotations of femininity entailed by that word and all that it holds.

The phrase “I’m not like other girls” is therefore utilised by teenage girls to derive power by moving closer to masculinity, to be taken seriously, by separating themselves from the perceived status quo of what being a girl, what being “feminine” is. In this new age era, it seems acceptable and ‘cool’ to be a woman with stereotypically masculine qualities, hobbies and pleasures- none of these prevent you from being listened to rather than looked at.

BUT, women do not want to be immediately stereotyped as girly, or ‘like other girls’ because femininity is associated with being shallow, narcissistic, decadent, ditsy, bitchy, boy crazy…the list drags on. Attributing such characteristics to femininity  devalues it and perpetuates the idea that it is worthless in serious contexts. And girls use this as justification as to why they can’t be friends with other ‘standard’ girls.

Strong female characters in movies and books are either a ‘damsel in distress’ or are simply ‘strong’, lacking the complexity of what being both feminine and powerful can bring. For a woman to be able to fight, her femininity must be eradicated in contrast to the male protagonists or villains who have layers written into their personality and are not just left monochromatically masculine.

Why must femininity be eradicated in order for a woman to hold up to men in the political sphere and in general society? This phenomenon of not being like other ‘girls’, or rather ‘girly girls’ is a humble brag that shouldn’t be toyed with; it simply perpetuates the pre-conceived assumption that the masculine, typically associated with the man, has a superior hold in the ‘real world’. Women can wear lipstick and read, cook and work in an office, be ‘down to earth’ and wear short skirts. There exists no binary opposition between physical/intellectual capabilities and ‘girly’ interests.

No one’s asking you to be a social justice warrior, some caricature of a feminist who dyes their armpit hair, wears Doc Martens and identifies with Sylvia Plath in the biblical sense. But simply think twice before you disparage femininity by filing the feminine woman away, out of sight and of mind, when she is involved in something that is not concerned with your pleasure. Because femininity isn’t a weakness. 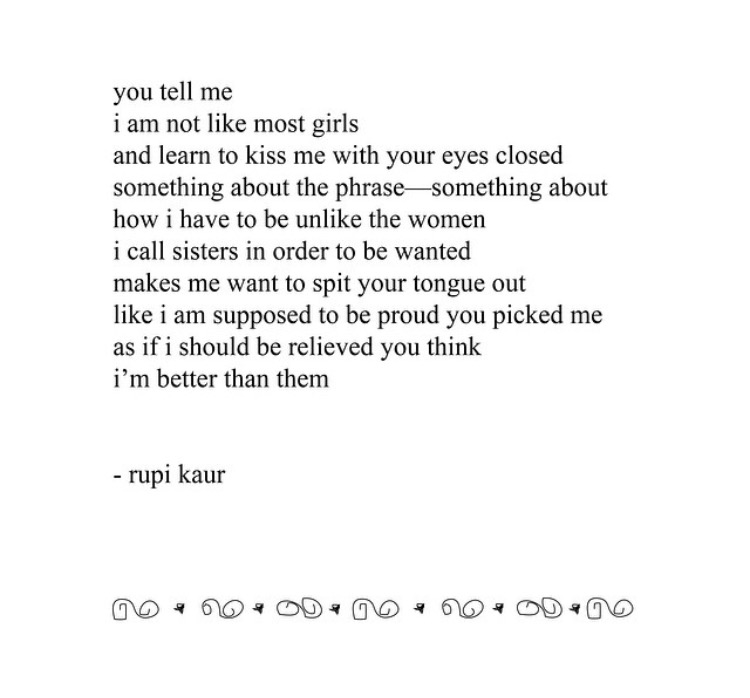 -Savannah Brown – https://www.youtube.com/watch?v=DpelSFTFkHc (“I’m not like other girls” – inspired this rant)

-all images sourced by tumblr