In this essay, I will examine the potential of narrative for promoting philosophical inquiry in expressing thoughts and arguments which effect the spectator’s emotional engagement. I will argue that narrative can aid philosophical inquiry, however a film’s narrative alone is limited in terms of its philosophical contribution. Although narrative can guide the spectator through a thought process, the affective properties of films are needed to prompt reflection on this thought process. I will utilise Sinnerbrink’s autonomous mood sequence idea to address the gap between philosophical inquiry and active, emotional engagement. Then, I will aesthetically analyse Lynch’s Mulholland Drive as an example of how the spectator’s emotions are affected by the film’s affective properties. Ultimately, a film’s autonomous mood sequence shows how narrative alone cannot engage the spectator as actively as it would by interacting with aesthetic features.

Cinematic narrative has the power of transforming ordinary films into examples of philosophy by expressing thoughts and arguments. Linear narratives can act similarly to traditional philosophical methods which seek to raise a question, explore it through analysis and finally provide a conclusion. The process of philosophical narrative in text allows the expression of thoughts for the reader to reflect on and often utilises thought experiments, such as Descartes’ ‘evil daemon’ theory, to consider a hypothesis and provide mental reflection on its implications. If one views cinema as an expression of philosophical arguments, a film like Blade Runner can be reduced to a thought experiment which conceptually tests the implications of what would unfold if artificial intelligences were placed in human bodies. By acting as a counterexample or thought experiment regarding philosophical arguments on humanity (Carroll 2011), the narrative becomes a catalyst for the spectator’s existential reflection on what it means to be human. The conclusion which the film’s narrative meaning encourages is that emotions seem fundamental to humanity while the ambiguous ending allows for self-reflection. 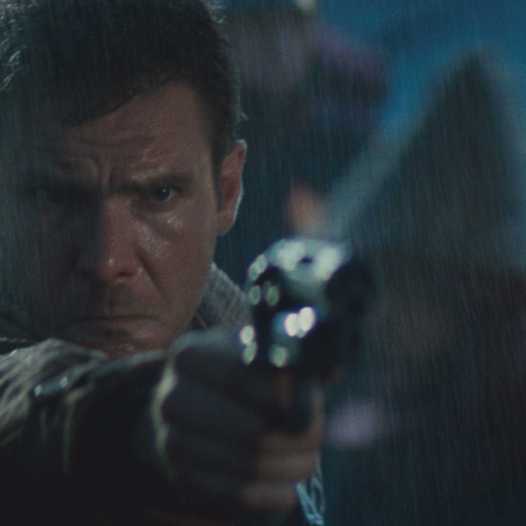 Films which provide a clear, linear narrative share features with traditional philosophy in their structure, closure and coherence. Narratives deliver knowledge while absorbing spectators in a fictional representation they believe in during their engagement with it (Smith 1995:114). They imply an argument by carrying ‘messages’ which mimic the conclusion of philosophical arguments (Mulhall 2016:34). Arguably, what distinguishes cinematic narratives from philosophical thought experiments is also a film’s ability to provoke emotional responses that arrive through an understanding of the narrative structure.

The worry with justifying the role of linear narratives in promoting particular thoughts is that narrative is not unique to the cinematic medium because it is shared with other art forms, such as prose. Films should not merely ‘paraphrase’ philosophical arguments or provide the potential for thought experiments, but rather “make independent, significant contributions” inherent in the film’s form (Livingston 2009:12). Cinematic narratives become unique when they are combined with affective properties, which suggests that narrative alone is not essential for philosophical questioning because films possess aesthetic value that does not need to replicate the characteristics of traditional philosophy. Film philosophy should not be reduced to plot or thought experiments because its value arises from its emotional impact on the viewer, whose felt experience and thoughts are a consequence of the atmosphere which shapes one’s thinking. While films can imitate philosophy in their illustration of claims through imaginative investigations, these claims are not explicitly argued for because their unique philosophical value is tied to their aesthetic features (Gaut 2015:41).

The philosophical value of Blade Runner is not merely its narrative, but also its use of ‘film noir’ to produce moods and feelings (Coplan 2015:122). Elements of visual style, such as the high contrast lighting design and the chiaroscuro effect in scenes shot at night, often obscures characters by objects or dark shadows in the frame. The scenes’ chaotic nature is emphasised through the execution of extreme angles and the inclusion of motifs such as pathetic fallacy to produce feelings of paranoia, threat and alienation as well as an ominous mood, creating a sense of impending doom (Coplan 2015). Although the spectator lacks conscious awareness of the formal style, manipulated by the director and cinematographer, the features produce an affective state in the viewer, who experiences a physiological arousal. This promotes his philosophical inquiry through the evocation of mood at bodily level (Coplan 2015:130). Cinematic devices lack the need for a clear narrative because the aesthetic which engages our emotional responses can be driven through mood sequences.

Autonomous mood sequences are perhaps a better alternative for doing philosophy because their aesthetic properties are unique to the cinematic experience. While narrative can guide the spectator through a thought process, it alone cannot prompt active reflection with that philosophical thought process, and it does not form an argument in the same way as philosophical literature. The first part of Mulholland Drive is a soft-coloured construction reminiscent of badly produced films, such as Dynasty. However, this deliberately draws attention to the ‘Club Silencio’ scene later; it is an enveloping, stylized autonomous mood sequence which “eclipses the narrative content in favour of sensation and effect” (Gianopoulou 2013:6) while simultaneously provoking reflection on the illusory qualities of cinematic experience. The singer’s emotional performance creates an art of composition as the dark colours in the empty street and alleyway create an impending feeling of anxiety and mystery, while the camera lens’ rush towards the opening door produces exhilaration. The first few shots and camera movements around the gate, doors and boxes alludes to the key, creating an idea of fear in a different context. The magician explains, in several languages, that everything is an illusion before Betty begins uncontrollably shaking, thus signalling the deterioration of her fantasy or perhaps creating a parallel to Diane’s murder and Rita’s car crash, which perhaps occurs in the same time-space. (Sinnerbrink 2013:86). 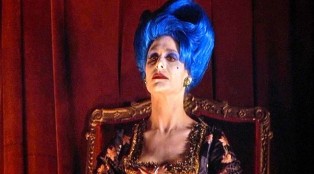 The visual and auditory mood sequences displace the narrative while simultaneously communicating the Lynchian message of the interaction between unconscious intuition, performance and aesthetic, creating a meta-cinematic exposure of the cinematic world’s illusory qualities. The spectator’s unconscious and conscious processes combine with pre-reflective sensations which open them to the aesthetic power of cinema and provoke mood, emotion and meaning. Sinnerbrink suggests that this allows the viewer to reflect on the doubling of the theatre as an aesthetic truth representing the memory of cinema; this becomes a space where images, dialogue and action create moods (2013:86). 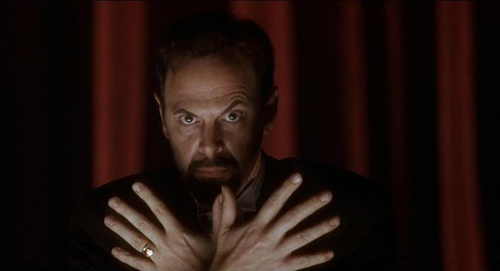 As Diane’s fantasy unravels, the performer’s poignantly emotional rendering of her song (an affective feature) shows, in terms of narrative, that their love is a sad illusion. However, this cognitive disorientation ultimately lends itself to the greater meaning of the film. The aesthetic power of cinema is an illusory construct that mirrors the unreal illusion of Rita/Betty; it is a technologically mediated ‘pursuit of magic’ which creates a dream-like experience through cinematic abstractions (Sinnerbrink 2013:86). Narrative is abandoned in favour of soundscape, colour and staging, such as the blue placed around the room amidst the dominance of red. While the magician plays a clarinet with a muted trumpet sound and the music of the ‘live performance’ is ironically taped (Giannopoulou 2013:65), Betty’s discovery of the key (the fake narrative) is a similar illusion; the key is not meant for the purpose they assume it is. Nevertheless, despite our knowledge that this is a construction, our conscious and unconscious processes create a reflective mood which coincides with their own emotional crying and, despite its lack of purpose, the tears nevertheless affect the spectator. Mulholland Drive’s autonomous mood sequence shows the power of aesthetic features in engaging our experience of both real and virtual worlds. As the mood works with and overpowers the narrative meaning, it demonstrates how cinema can perform in philosophy creatively through affective means.

The autonomous mood sequence lends itself to Mulholland Drive’s subversion of the spectator’s narrative expectations and captivates them by drawing attention to the cinematic mechanisms. The audience is made aware of the film-making because the aesthetic features draw attention to the complex and confusing narrative structure through the experience of cinema. The non-narrative movement of the autonomous mood sequence is an example of moving the film and its message forward without relying on narrative at all. By unravelling a seemingly straightforward narrative, Lynch allows for a philosophical, self-reflexive investigation of the nature of film which cannot be achieved through linear narrative or any non-cinematic format. He utilises film as a tool, rather than a mere example or resource, for guiding thinking as part of philosophical knowledge by exploring the relationship between illusion and the real. The two narratives are confusing, and a straightforward interpretation could suggest he plays on dreams and reality by showing an alternative dream-world experience for the two protagonists. However, this intentional lack of a coherent, linear narrative and the constant questioning draws attention to the film’s aesthetic coherence. The viewer is encouraged to read into the role of different aesthetic devices that reveal the horrible reality lurking underneath the initially idyllic portrayal of American life. 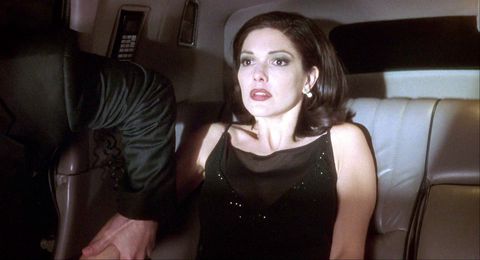 However, the audience’s mental work at the beginning of the film seems almost futile after the second narrative comes into play, producing a need to re-watch and re-examine its aesthetic features again as one begins to recognise the same people from Diane’s perfect world in her real life. The mystery involving the mob subplot is a construction trying to correct what is happening in her reality, yet it evokes fragmentary tropes and images from other films, like Sunset Boulevard (Sinnerbrink 2013:81). However, while the aesthetic features increase one’s desire to work harder cognitively, they also encourage the spectator to let go of the superficial narrative they are provoked to desire at the beginning of the film and to embrace the autonomous mood sequences. Unlike the traditional Hollywood film which places narrative at its core, Mulholland Drive dismantles narrative form by stressing cinematic reflexivity and therefore placing narrative secondary to cinematic style. Affective properties in this film are superior to the traditional requirements of narrative scenes, settings or plots because the autonomous aesthetic sequence allows for a saturation of narrative structure. 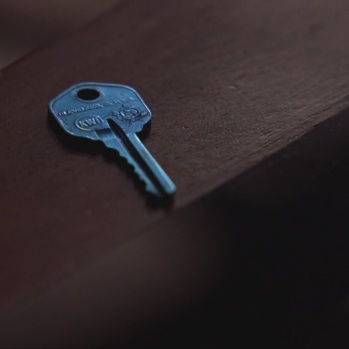 This affective subversion of narrative features mirrors the puzzle of philosophy- it provokes a cognitive and emotional self-reflection on the experience by exploring the relationship between fantasy and reality, along with the power of cinema and imagination. Subverting narrative structures could promote philosophical inquiry more greatly than linear narratives when it comes to certain questions, as it enables spectators to move beyond what they are easily able to make sense of. However, to experience this anti-narrative mode of thinking, aesthetic affects need to put one in an affective mode which prioritises uniquely cinematic features. Even films where narrative is philosophically useful, such as Blade Runner, rely on aesthetic features to produce affective and cognitive qualities and create a sense of mood integral to the philosophical message. The aesthetic allows a progression of moods and feelings which distances cinematic philosophy from mere fiction. However, the felt experience offered by the aesthetic ultimately interacts with some form of narrative structure as autonomous mood sequences in films like Mulholland Drive nevertheless depend on the elicitation and evasion of our desire for narrative coherence and closure in order to create a mysterious and menacing mood (Sinnerbrink 2013:81).

Therefore, while Sinnerbrink accounts for the use of affective properties in imaginatively engaging the viewer, Carroll’s idea of narrative suggests that some use of it, whether a subversion or development, is important in positing a question for the film to answer philosophically- whether through plot or aesthetics. A simple use of narrative is merely like a philosophical thought experiment not unique to the cinematic medium. However, narrative’s connection with affective dispositions in the receiver, through techniques such as autonomous mood sequences, shows how a spectator’s emotions can influence their philosophical beliefs. Films can be both artistic and philosophical, therefore a synthesis of both some form of narrative structures and autonomous mood sequences can complement one another to promote philosophical inquiry. There is a unique relationship between the audio-visual interaction of narrative with affective features, which ultimately work together to enable us to go beyond what we are easily able to make sense of.