Valentino’s 60s drama queens had hair higher than heaven. Pierpaolo Piccioli seems to be cultivating a look. I can’t quite put my finger on it and perhaps this is a testament to it’s originality. Last time around it was a mash up of the 80s and renaissance, this time he turned his gaze towards classical antiquity; the 17th and 18th century. But he also had Ziggy Stardust in mind. 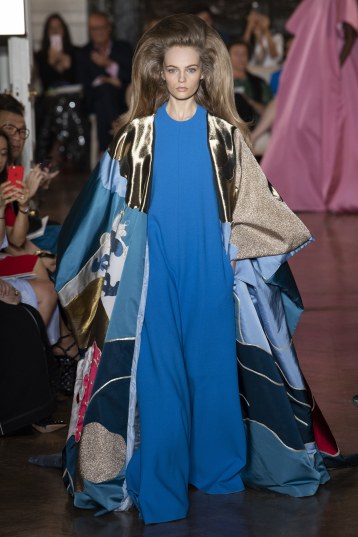 The collection opened with a kimono with a gilded print of waves and a merman, underneath was a light blue jumpsuit. It seemed simple enough but the effect was dizzying. Gold could be liturgical, antiquated and classic, but it can also be retro, sexy and cheap. Valentino played with the semantic value of colours in this collection. 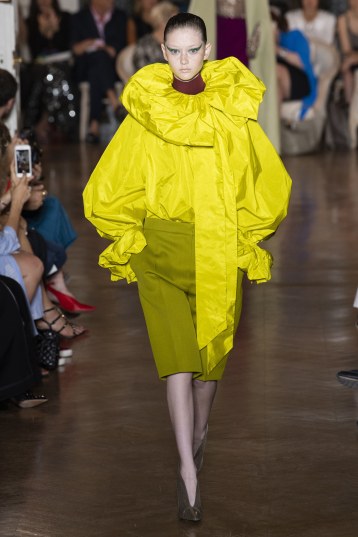 The surrealist painter Paul Delvaux said he wanted to paint a word he wanted to live in, and one he could live in too. Pierpaolo Piccioli’s 60s drama queen, walked though a contemplative world, one that resembles our world but with different rules.

The 60s hair in this context was not simply the frivolous and thoughtless transformations of shape, volume and hemline through fashion history. It was presented in a new context and in this mournful world it made me think of innocence and girlhood. Large bobbing heads of little dolls in large ball gowns. It evoked a fantastical image of little girls enfolded in frills and embellishment. Maybe I’m reading into this too much, maybe it’s because I’m reading Lolita.

This kimono look opened a floodgate to odd pairings of colour, shape and texture. The palette defied theme but retained continuity. It was followed by a chartreuse number that might have blinded The Ballets Russes and a series of oversized curved dresses. It retained continuity in it’s ability to evoke a feeling of a an unconventional glamour. It’s not quite shock but rather a feeling that you might have forgotten something, someones name, where you misplaced your keys that sort of feeling.

Galliano explored layering, something he has always done with theatricality and wit, and arrived at some strange places. Transparent pleats layered in mismatching colours; blue over beige and rips like ladders on tights had an electric effect. Galliano’s frumpy chic looks had some swollen silhouettes that payed homage to Leigh Bowery. 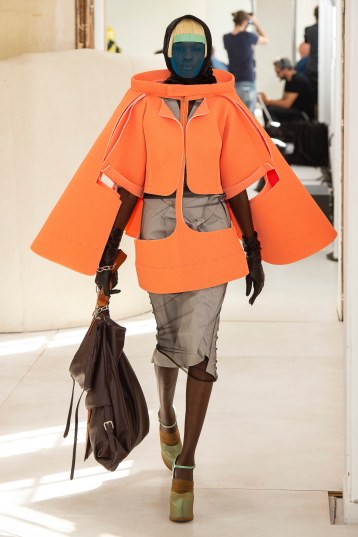 He told vogue that his designs were the undiluted identity of the house, something about perfume. The first look was a beige trench coat, not too edgy, over it was a veil to match the stockings, very perverse. But over that was an orange poncho. At least it could have been a poncho.The cutouts made the lower part of the sleeves optional and the fabric seemed to float in some parts and restrict in others. In fashion, a cut out is usually about showing skin. Galliano took this often sexual cue and he gave us something more complex. A lot of the looks in this collection seem to have a ready made feel. Layering done like Ikea, you put it together yourself.

Orange straps held tweed capes together and neoprene sleeves where folded at the neck. The elegant modularity of this collection was reflected in the accessories. See-through blue masks and plastic head wraps and phones that sprouted from ones leg with what looked like a repurposed selfie stick.

There is always something manic about a Galliano collection, every seam is imbued with a camp sort of energy. Maybe it’s the way the models walk, or the fact he tells the models the story of the collection. When he was at Dior it was stories about Princess Anastasia smuggling diamonds, he cheers on a baby Kate Moss. She’s running in the most dramatic dress. I wonder what story he told the girls this season. I hope it wasn’t about Ikea, but I hear the best minds find inspiration everywhere

Iris in contrast to Galiano’s modular designs, offers something singular in both vision and cut. Her 3D printed dresses have been mapping out new territory for the world of couture. She faces technical problems in places no one will go. But this season she offered her most wearable looks to date. A series of felt frock coats, which provided a less abstract situation for her to experiment with her structures which I’ve lovingly termed ‘hives’. 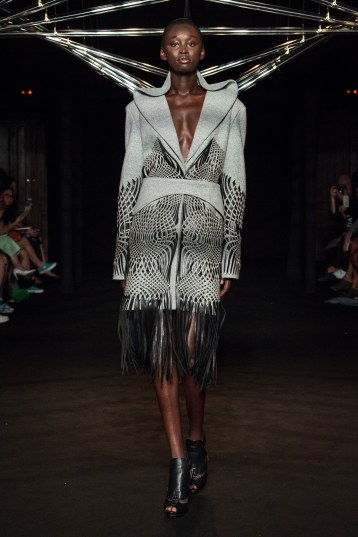 She seemed to be playing with the idea of embellishment, fashion is after all a decorative art. This was explored through the usual route. Take a form of embellishment and do something unexpected with it. She presented pleats and fringe in her abstract visual language.

I recently watched this nautical themed sci-fi film titled Evolution by Lucile Hadžihalilović set on an island of young boys and their maternal figures that might be aliens, or starfish. It came to mind as I watched the Iris Van Herpen show, the textures; the biomorphic basis and the mechanical process.

The expectations for the Chanel show is the same every season, give us dramatic fairy tale settings and give us tweed. You would think this would get boring but Kaiser Karl is the queen of reinvention and this season he gave us clunky 90s silhouette; endless slits that met tweed jackets at the hip. The shock of pink lining on on the long slit sleeves were awkward but made sense when they came with opera gloves.

Karl softened the angularity of the slits with some curved hemlines and Edwardian sleeves. But sometimes they came with buttons aligned with military severity.

I didn’t think anyone needed a late, late, late review of the couture shows, but I wanted to write one because it’s what my heart needed.